How did one high school student raise over $2,000 in cash and gift cards, and $7,500 worth of critical supplies for DuPagePads clients?

Jack’s creative fundraiser and donation drive resulted in him recently receiving a Naperville Youth Service Award from the mayor in front of the Naperville City Council.

Jack, a member of St. Petronille Parish in Glen Ellyn, regularly volunteers at DuPagePads Interim (Overnight) Housing sites. Along with this service, he has been an active Boy Scout for many years.

This spring, Jack needed to complete an Eagle Scout Project. He created a two-part fundraiser:

“Jack could have built something, he’s very hands-on, but he kept saying he wanted to do something different and unique. Then he came to us with the idea of the concert and he knew exactly who he wanted it to benefit: DuPagePads,” Jack’s parents share proudly.

Jack and friends dropping off his donation at DuPagePads

For the collection drive, Jack organized two dozen volunteers to solicit needed items outside of major retailers in DuPage County. At the end of his collection, he had a garage packed full of donations including clothing, shoes, bath linens, toiletries, paper products, personal hygiene and cleaning supplies, bicycles and gift cards.

Jack’s benefit concert was held at his congregation on July 29th and featured student musicians. He spoke with passion in his opening remarks at the event:

“Most of us have not experienced homelessness or its hardships. Unfortunately, for many people in our community, this is a reality. I believe each one of us has an obligation to help the homeless in our community. We need to recognize a home is not only shelter, but also safety, stability, and a source of pride and self-respect.”

Jack received a Naperville Youth Service Award for his hard work and dedication to DuPagePads mission to end homelessness. He was recognized in front of the Naperville City Council and Mayor on November 20th.

Thank you to Jack, his volunteers and everyone who assisted him. As a result, he not only completed his Eagle Scout project, but the magnitude of his in-kind donations will help DuPagePads transform lives.

Interested in creating your own in-kind donation drive or looking for an Eagle Scout project?  Contact Josie Mattern at (630) 517-0569 or jmattern@dupagepads.org 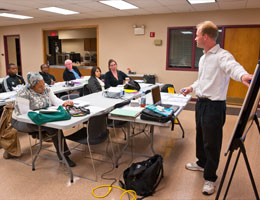