“I had to learn to trust people”, Cleveland’s story of Transforming Impossible into Possible

“I had to learn to trust people”, Cleveland’s story of Transforming Impossible into Possible

Cleveland came to DuPagePads in 2012, after being homeless for 8 years.

During his time in the Interim (Overnight) Housing program, he was reluctant to use our services and didn’t attend groups or classes offered by the Client Service Center and Career Employment Solutions Center.

Despite having a place to call “home”, Cleveland was still unable to trust anyone after being let down so many times before. “I was mentally and physically destroyed, and my mind was all over the place; I was unstable.”

That is, until he met his DuPagePads Case Manager, the director of Career/Employment Solutions and our Employment Specialist.

“I had to learn to trust people. Katie, Lutisha, and Brittany helped me do that.”

In December 2018, Cleveland graduated from the TIP® (Transforming Impossible into Possible) Program, a six-week, self-empowerment workshop aimed at increasing DuPagePads client’s positive outlook for the future.

“In the time Cleveland spent with us in the TIP® program, we saw a change in his confidence and leadership skills. He became more self-aware of himself; started setting short and long-term life and personal goals; and began to forgive himself and others for past trauma,” Lutisha Jefferson, DuPagePads Career Employment Solutions Director says.

“The TIP® group opened my eyes wider. I learned a lot from it, I realized that the only one hurting me, was myself. TIP® helped me deal with things and then let it go.”

“Everyone should take TIP®, it was the best class I’ve ever taken.”

At the start of each class, a green ball is passed around the room while clients ask each other, “How are you TIPping?” Before the ball is sent to the next person, everyone chants “TIP, TIP, TIP.”

DuPagePads Employment Specialist shares. “After seeing Cleveland’s growth and transformation, we wanted Cleveland to have his own ball because we wanted him to continue with the positive changes he had made. We wanted him to know that we saw his change and that we support him, just like he supported everyone in his group.”

Cleveland will be celebrating his 5-year anniversary of having his own home, he wants everyone to know, “I’m thankful for my own place where I can be my own person. Without DuPagePads I’d be lost. I would either be in jail or back on the streets living a life of crime.”

Because of YOUR support, Cleveland has a home of his own and access to groups and classes that will continue to transform the impossible into possible for him. 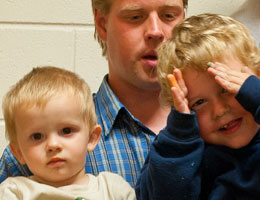