In an Instant – Steve’s Story

In an Instant – Steve’s Story

An insurance salesman with a steady income, Steve never thought he would end up homeless.

In an instant, Steve’s life changed.

Suffering from a stroke, Steve was cared for at the hospital. Though he survived, he faced immense pain. Consequently, he went through physical therapy and was prescribed pain medication. As a coping mechanism, Steve soon became addicted to the pain medication. His doctor saw what was happening and stopped providing prescription refills. However, Steve’s addiction was strong and he started using illegal drugs to manage his pain. His life soon spiraled out of control; he lost his livelihood and housing.

With nowhere to turn, he came to DuPagePads which provided him Interim (Overnight) Housing, meals and access to other basic needs. He began working closely with his case manager Jenny on a sobriety plan. As a Certified Alcohol and other Drug abuse Counselor (CADC), she provided Steve with on-going substance abuse counseling and referred him to a substance abuse recovery support group at DuPagePads Client Service Center in downtown Wheaton, Winner’s Circle.

“Jenny is a life saver. She provided me with real world coping advice. For example, if I feel myself wanting to use to pop a rubber band around my wrist as a reminder to stay focused and on track,” Steve says.

Steve began completing volunteer projects at the Interim (Overnight) Housing Program which gave him purpose and a way to give back. “DuPagePads saw potential in me, potential that I didn’t even see in myself,” he said.

After 45 days, Steve was able to obtain an apartment and he continues to volunteer at the Interim (Overnight) Housing sites. He still regularly meets with Jenny to work on this on-going sobriety plan.

Steve admits, “I don’t know what I would do without DuPagePads or my case manager Jenny. She is better than a therapist because she helped me face the harsh reality of the path I was going down and woke me up. DuPagePads motto rings so true in my life, ‘When someone believes in you, everything can change.’” 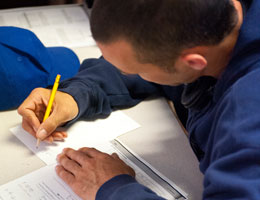