In the summers of 2010-2013, Mike DeMeritt ran 100 miles to raise funds for DuPage Pads’ housing programs and supportive services for families and individuals who are homeless. This year, in a break from tradition, Mike decided that he would lift 100 tons over the course of eight hours!

On August 30th, at 8:00am, Mike set off on accomplishing his goal. He knew making it to the 100 ton mark would be all about endurance. Mike and the coaching staff at CrossFit Carol Stream developed a plan which included five basic lifts to be segmented over the allotted time span and scheduled rests for resting, icing and eating. Even though he knew it would be easier in the beginning, the idea was to maintain a constant effort over the course of the entire eight hours.

“Soon enough it began to feel pretty difficult, especially after the initial excitement wore off,” said Mike. Despite fatigue setting in, he dug deep during hours five through seven, describing them as, “the dark hours of serious effort and motivational challenge.”

Finally, the last hour arrived and Mike could feel himself getting closer and closer to his goal. Knowing what was at stake for DuPage Pads, he continued lifting with “renewed enthusiasm and excitement” and reached his goal at 3:45pm, with 15 minutes to spare.

Mike was able to accomplish this feat of strength without injury or strain which he said, “is a definite testament to the good form, good sense and good nutrition we practice at CrossFit Carol Stream.”

Mike would like to thank the coaching staff and fellow athletes from CrossFit Carol Stream for helping him reach his goal. He would also like to thank all of the supporters that came out to provide encouragement and moral support, as well as the people who donated through his fundraising webpage.

DuPage Pads would like to extend a heartfelt thank you and a huge round of applause to Mike for raising over $11,000 and reaching his goal of lifting 100 tons.

Since 2010, Mike has cumulatively raised more than $51,000 for DuPage Pads’ solution to end homelessness; housing coupled with support services and employment. His fundraisers are inspiring and highlight what amazing feats can be accomplished by an individual.

Thank you, Mike, for your continued dedication to our mission to end homelessness in DuPage County! 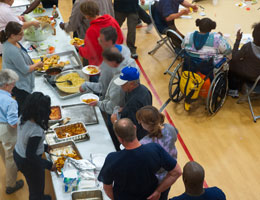